Port of Gothenburg recently published its freight figures for 2019, presenting a growth in its container volumes. Specifically, 456.000 TEU were transported through the port's rail infrastructure, marking the largest rail volume in the port's 400-year history.

Moreover, much of the long-range export goods consists of basic industrial goods like steel and forest products from all over Sweden, meaning almost its whole container freight, is transferred to the Port of Gothenburg via rail.

"Growth in rail volumes is reassuring on several levels. The fact that we are the port of Sweden – from north to south – is very obvious. It is also confirmation that our investment in the port’s transshipment potential and rail infrastructure is the right path to follow." 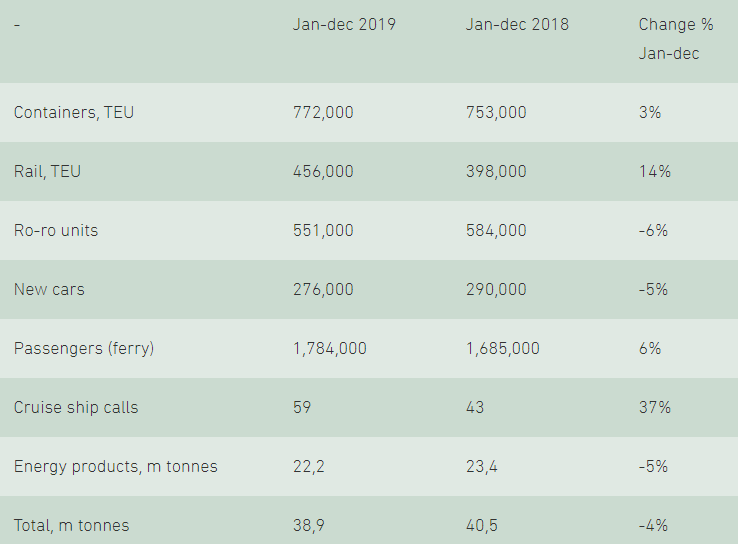 "In 2019, the Port Authority adopted a new environmental goal where the company was set the target of reducing the port’s CO2 emissions throughout the whole of the Gothenburg region by 70 per cent through to 2030. To achieve this goal, the ongoing transition from road to rail is vital."

A 5% fall was seen in Port of Gothenburg's handling of new cars, noting 276.000 units. The downturn can be attributed almost entirely to a decline in imports. Although the volumes increased during the second half of the year, driven largely by a rise in exports by Volvo Cars.

The highest second-half figure in port's history was marked during June-December, as 12.7 million tonnes of energy products were handled.

Concluding, more than 110.000 cruise passengers onboard 60 cruise ships visited Gothenburg, a passenger's number that the port had never seen before.