In May, Stadler Rail delivered the first of 17 new trains to the Glasgow Subway, equipped for driverless operations. This photo feature takes a visual tour of the new rolling stock, and the wider modernisation of this historic metro system. 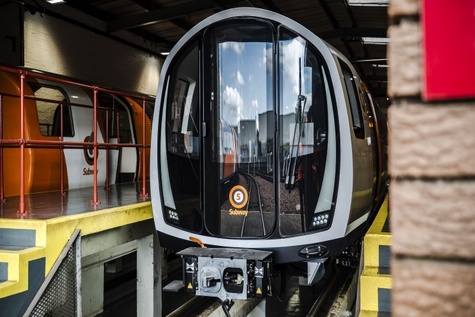 In May, Stadler Rail delivered the first of 17 new trains to the Glasgow Subway, equipped for driverless operations. This photo feature takes a visual tour of the new rolling stock, and the wider modernisation of this historic metro system.

The Glasgow Subway opened for the first time in December 1896, making it the third-oldest underground metro system in the world, behind only the London Underground and Budapest Metro. With its circular route and distinctive orange livery, Glasgow’s underground system has been playfully nicknamed ‘the Clockwork Orange’ by the media, after Anthony Burgess’s 1962 satirical novel of the same name. The 15-station, 10.5km metro loop plays an important role in the economic and cultural life of the city, recording 12.7 million journeys in 2017/18.

For a venerable metro system in 2019, Glasgow Subway’s current rolling stock simply doesn’t cut the mustard. The three-car trains used on the system today were originally built by now-defunct Sheffield rail manufacturer Metro-Cammell in the late 1970s, entering service in April 1980. While the trains have undergone multiple refurbishments and eight new trailer cars were introduced in 1992, they remain outdated and out-of-touch with the expectations of modern metro riders.

That’s all set to change in the next year as the regional transport executive that runs the metro, the Strathclyde Partnership for Transport (SPT), continues its ongoing modernisation of the system. The modernisation will involve, among other upgrades, the introduction of a fleet of 17 brand-new four-car metro trains, designed and delivered by Swiss rolling stock manufacturer Stadler Rail and ready for unattended train operation (UTO), in which there is no driver and the train handles starting and stopping, as well as door operation and emergency functions.

The first of these new trains arrived in Glasgow in May to begin an extensive testing period by Stadler, with two more due to arrive this summer. The new trains are expected to start service in 2020, but will be operated by drivers initially – UTO is scheduled to be implemented on the trains in 2021.

Stadler Rail’s newly delivered electrical multiple unit (EMU), the first of 17 to be delivered, sits alongside one of the subway’s current trains (new train on the right) at a rail depot in Glasgow. Stadler will now begin a rolling testing programme to ensure the new trains are fit for purpose before they are handed over to SPT.

“This is a fantastic day for the subway and for everyone involved in the delivery of the subway modernisation programme,” said SPT chair Councillor Dr Martin Bartos in May. “We are delighted to see the first new train in Glasgow.  It’s a big day for the project team who have worked tirelessly to achieve this milestone for the organisation.”

The new trains have been designed for automated and driverless operation, which will make the Glasgow Metro one of the world’s most advanced when driverless services make their expected debut in 2021.

For now, auxiliary driver’s cabs will be fitted to the rolling stock to enable normal operations, but in driverless mode, passengers will be able to look out into the tunnel ahead through an open view at the front of the train. The trains will have a maximum speed of 58km/h.

SPT awarded the £200m contract for the new trains, as well as associated control systems,  to the Stadler/Ansaldo STS consortium in 2016. Associated work being carried out by the consortium includes new signalling, a control centre, depot upgrades and new screen doors to improve platform safety.

Modernisation across the Glasgow Subway

The trains are being delivered as part of a wider £288m modernisation scheme for the Glasgow Metro, the first full-scale upgrade of the system in more than three decades. The project has been in progress since July 2011, when work started on the network’s flagship Hillhead station.

Pictured above is the new entrance to St Enoch, the busiest station on the Glasgow Metro, serving more than two million passengers a year. As well as installing elevators, the £5.8m renovation project at St Enoch saw the installation of an impressive glass entrance canopy on St Enoch Square. The full project at St Enoch was completed in August 2015.

More widely, the modernisation programme is progressing well. Upgrades have been completed at 11 of the system’s 15 stations; two more are expected to complete by the end of summer 2019, with work on the final two stations set to begin by the end of the year.

Delegates inspect the interior of the new Glasgow Subway train at InnoTrans trade show in Berlin in September 2018, where the nearly-completed rolling stock was showcased publicly for the first time.

The trains’ interior design brings them up to date with modern metro interior trends, with open gangways to maximise standing room and allowing passengers to move from one end of the train to the other without exiting carriages.

The carriages also feature open spaces for wheelchairs to improve access and functionality for disabled riders. The ride should be smoother and quieter for all passengers thanks to the trains’ new bogies, which feature air suspension.

Above is an older image showing the current train set (left) alongside a computer-generated image of the new rolling stock. Stadler’s new trains have been designed to fit the Victorian-era dimensions of the subway, so while they are composed of four cars to their predecessor’s three, the length (just under 40m), width (2.3m) and height (2.6m) is broadly the same. The trains were also built to work with the metro system’s unusual 1,219mm track gauge.

The delivery of the new trains seems to be progressing smoothly, as does the Glasgow Subway’s broader modernisation plan. Within the next two years, the city of Glasgow should be equipped with new trains and underground stations that are truly worthy of the subway’s economic, cultural and historical significance.

“This new train from Stadler really is excellent in both design and quality,” said SPT senior director Charlie Hoskins last year. “Everyone involved in this project is very aware of the proud rail history of the subway as the third-oldest in the world, and these new trains will continue that legacy for many years to come.”