In pictures: the world’s most beautiful funicular railways

From Lisbon’s iconic Gloria Funicular to the Duquesne Incline in Pittsburgh, funicular railways have been carrying passengers to otherwise unreachable places for centuries. We profile the story of some of the oldest and most unique examples of these historically influential lines. 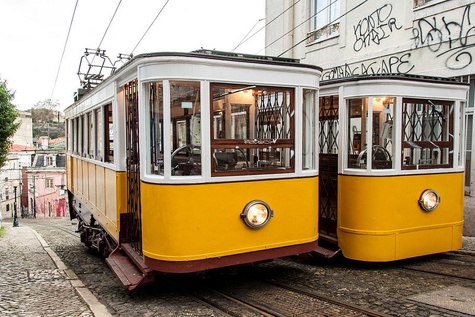 From Lisbon’s iconic Gloria Funicular to the Duquesne Incline in Pittsburgh, funicular railways have been carrying passengers to otherwise unreachable places for centuries. We profile the story of some of the oldest and most unique examples of these historically influential lines.

They might not boast the latest cutting-edge technology, nor run along miles and miles of track, but throughout centuries, funicular railways have become a fascinating vintage mode of transport, as well as a popular tourist attraction in many locations around the world.

Usually running on very small portions of tracks, many of them are still operational in several European hubs, their construction dating as far back as the 19th century.

The very first, the Lyon Funicular, was introduced in the French city in 1862, while the UK’s oldest funicular, which can be found in Scarborough, was inaugurated in 1875.

Yet while many of them have managed to survive until this day – some even earning the title of National Monuments in their country – others were not as lucky.

The most notable case is Mount Vesuvius, whose funicular was repeatedly damaged by volcanic eruptions and then closed in the 1940s, having been opened in 1880. However, its memory still survives through the lyrics of Peppino Turco’s famousFuniculì, Funiculà song.

Here’s a look at some of the most spectacular and panoramic funiculars you can find around the world.

One of the most famous funiculars in Europe, Lisbon’s iconic Gloria Funicular was inaugurated in October 1885.

Initially designed to be powered by water, the line moved to steam power between 1886 and 1915, after which it was electrified.

For this reason, it no longer technically qualifies as a funicular, as traction is not provided by cables but rather electronic motors.

Nevertheless, this didn’t prevent the Gloria Funicular from being declared a Portuguese National Monument in 2002.

Despite being inoperative since 2013, Los Angeles’s Angels Flight railway still holds a curious record: it is thought to have carried more passengers per mile than any other railway in the world.

A tiny segment of tracks stretching for a mere 315ft, it is also the shortest railway in length, as well as – funnily enough – the most trafficked one.

Having been opened at the dawn of the 20th century, the Angels’ Flight and its famous orange cars have endured a rather troubled existence.

Designed to carry citizens up and down the then residential area of Bunker Hill, it was first closed in 1969, as the district slowly turned into the commercial and cultural centre of Downtown LA.

The Angels’ Flight funicular was then moved south of its original site in the 1990s, though for only a short span; it was, in fact, closed again in 2001 as a technical failure left one passenger dead and many injured.

Having reopened in 2010, the line’s final spell ended in 2013, when a minor derailment caused its permanent closure. Its two cars Olivet and Sinai are currently being restored, though the chances of seeing it back in action remain low.

In the collective consciousness, funicular railways are traditionally small and over ground, but the Carmelit funicular, located in the Israeli city of Halifa, is one of the exceptions.

Inaugurated in 1959, the Carmelit represents a small – and sporadically used – part of the only underground metro system in Israel.

It owes its name to the Mount Carmel, which oversees the city of Haifa, and was initially designed to connect the hub’s commercial districts to its residential centre located on top of the mountain.

However, it is now starting to outlive its purpose, as the population has moved to other parts of the city and rarely uses its six stations.

The US city of Pittsburgh in Pennsylvania has two funicular railways, the 1870’s Monongahela – the oldest line in operation in the country – and the Duquesne Incline, which is by far the most spectacular one.

Following the tracks of an old coal hoist, the Duquesne Incline is only seven years younger than its sister. It has been put under the management of the Society for the Preservation of The Duquesne Heights Incline since 1964. The company repaired it and reopened it after it was briefly closed.

Visitors can now sit on-board its refurbished trains to reach a panoramic view of Pittsburgh’s Golden Triangle, a commercial area that has become one of the city’s most popular attractions.

Stretching on the hill north of the German city of Wiesbaden – not far from Frankfurt – the Nerobergbahn funicular railway allows visitors to enjoy one of most panoramic views of the city.

Opened in 1888, it was among the first funiculars in the world to be propelled by water. Despite plans to convert it to an electric system in 1939, the line was suspended due to war damage during the Second World War.

Once reopened in 1948, it has been protected as a technical monument by the State of Hesse – the federation where Wiesbaden is located – since 1988.

Today, the funicular’s two yellow and blue cars climb the mountain near Wiesbaden in under four minutes.

Throughout time, Chile’s port city of Valparaiso – also known as the Jewel of the Pacific, since being built on several hills – has had not one, but 31 funiculars.

Branded in the city as ‘elevators’, these boxy cable cars were built between the late 19th century and the 1980s in several locations of the city, the historic centre of which was recently declared a UNESCO World Heritage Site.

Once the preferred public transit method in the city, about half of the elevators shut down in the years following the construction of the Panama Canal, which caused a significant slump in the city’s economy.

With 16 of these elevators still in force – and all of them registered as National Historic Monuments – only seven are effectively operating. The remaining nine are currently being restored and modernised.

Located in the Swiss canton of Schwyz, the Stoosbahn funicular links the village and mountain resort of Stoos to a number of towns in the Hintere Schlattli district.

Having been renovated in 2017, it currently holds the record for steepest funicular in the world, with a maximum gradient of 110%. The modernised version has replaced its older Schwyz-Stoos funicular, which had been inaugurated in 1933.

A popular attraction for both locals and tourists, the Stoosbahn covers 744m of Swiss Alps in just four minutes.

The funicular was built in 14 years at a cost of £40m and now features barrel-shaped carriages that rotate, as the car goes up, to keep the floor flat.

Another classic example of a European funicular, Naples’ Funicolare Centrale has been running since 1928 and is one of the most heavily trafficked cable railway lines in the world.

Currently serving four stations over 1,230m of track and with a total elevation of 170m, it’s the third of its kind to be built in Naples. A total of four funiculars are currently in use across the city – namely the Centrale, Chiaia, Montesanto and Mergellina – serving some 13 million people every year.

As for the Centrale, it connects the Neapolitan areas of Vomero and San Ferdinando and consists of three carriages with a total capacity of 450 passengers.