The flying stars of the 2017 Dubai Airshow 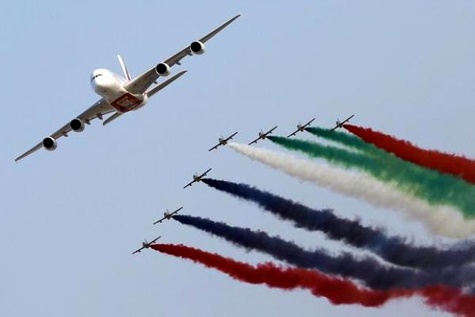 Once dismissed as a "cute little plane" by Airbus, the European multinational then bought a controlling stake in the program for just $1. The small-to-mid-size commercial plane had an uncertain future after the United States slapped a 300 percent preliminary duty on exports of the aircraft. That tariff followed a complaint from U.S. firm Boeing.

The Sikorsky CH-53E Super Stallion is the largest and heaviest helicopter in the U.S. military. It took its first flight on October 14, 1964, but the program has continued to show its worth with a new updated version soon to be unveiled. The U.S. Marine Corps has ordered 200 helicopters at a reported total cost of $25 billion.

The Chengdu J-10 is a Chinese-built jet fighter. It will be put through its paces in a daily aerobatic display by the PLAAF August 1st Air Demonstration Team. Introduced in 2006, it has been alleged that the aircraft was developed using technical information that was used to build Israel's Lavi jet. Defense analysts IHS Janes estimate that 400 have been built.

Another display team in attendance will be the Russian Knights, who will fly their Sukhoi Su-30Ms. The two-seat cockpit plane is a fourth generation development now boasting a range of about 1,900 miles. It has previously demonstrated an ability to perform advanced maneuvers such as "Pugachev's Cobra," which allows sudden mid-air braking.

Over 4,500 F-16s have been built since production was approved in 1976. Made for the U.S. Air Force by an earlier incarnation of Lockheed Martin, versions of the plane are still being sold to overseas customers. At least 27 countries have used some variant of the F-16. The aircraft has a top speed of 1,320 miles per hour and can climb at 50,000 feet a minute.

The Air Tractor AT-802 is an agricultural aircraft that can also be adapted into fire-fighting or armed versions. It first flew in the United States in October 1990 and is manufactured by Air Tractor. In January, the U.S. government approved the sale of 14 military versions to Kenya. It was reported that the planes would be deployed for bombing sorties against Somali militant group Al Shabaab.

The Bell Boeing V-22 Osprey helicopter is an American tiltrotor military aircraft with both vertical and forward takeoff and landing capabilities. The helicopter is the primary support aircraft for the U.S. Marine Corps. It is able to fly five-times faster than other helicopters by tilting rotors forward once in flight.

The Rafale is a French fighter jet. In service since 2001, its primary users are the French Air Force and Navy. The Egyptian Air Force also deploys the aircraft while India and Qatar currently have planes on order. As of July 2017, 160 had been built. The Rafale has a maximum speed of Mach 1.8, which is approximately 1,200 miles per hour. In English, "rafale" means gust of wind.

In June 2016, the C-2 formally entered service with the Japan Air Self-Defense Force. The domestically-built aircraft is designed to transport troops and drop supplies amid hostile environments. Its high wings means it can take-off and land sharply on short and unprepared runways. It is seen as a competitor to the Airbus A400M.